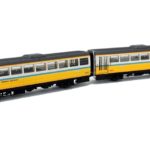 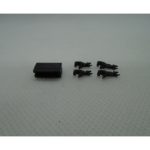 The British Rail Class 142 is a type of diesel railbus multiple unit designed to run in pairs for use on branch lines in Northern and South Western England and North Wales. Ninety six of the sets were built by BREL at Derby between 1985 and 1987 and followed on from the design of the Class 141. Initially, the Class 142 exhibited many operational problems including the inability to negotiate tight curves, a lack of power with poor braking and a rough uncomfortable ride. The class was extensively modified in subsequent years to overcome some of these shortcomings with the adoption of a more powerful diesel engine, uprated brakes and a plethora of internal and external detail improvements. Even with these changes the Class 142 was deemed unsuitable for working the tighter curves of the South Western rail system and the fleet was transferred post privatisation between NW Trains and Northern Spirit, where they are still used primarily on commuter routes between the major cities of the region.

The Dapol model of the Class 142 Railcar includes: